I had everything planned.  A simple relaxing one week vacation on a cruise ship, lots of options for a detoxing week (access to the gym, sauna, steam room, swimming pools, and whirlpool), meditation  in solitude on a quiet spot on the ship’s deck, options of health building food, evening entertainment and quiet restorative sleep in my cabin.  And the best part about this was that the ship was leaving right here from NYC. There would be no hassle of airports and everything that goes with it.

Nope. It wasn’t meant to be.

The cabin that I was assigned had a heavy smell of cigarette smoke. Hoping to get a change of cabin assignment, I immediately went to the Purser’s desk to see what could be done.  No change was possible at this time, but they would “freshen up"  the room.  They assured me that if  there was a problem later; they would change rooms for me then.

I was doubtful that this “freshening up” would do the trick, but the woman assured me  that it would.

Surprise. Two hours later, my room had not an iota of cigarette smoke, but now smelled chlorine bleach fresh, like a swimming pool.  Not perfect, but definitely endurable. Or so I thought.

After about an hour in the room, both my husband and I  had burning throats, burning eyes, and a bit of coughing to deal with. Actually it was so bad that my husband actually coughed up blood.

Further speaking with the Purser’s desk people revealed that there were now no cabins to switch to for the duration of the cruise, and that I should have said something at the beginning before they set sail. I thought I already did thispart. Obviously short term memory is not their forte.

This now left us with 2 options. Either sleep on the deck or get off at the first stop. We opted for the 2nd choice.

While aborting a 7-day vacation on a cruise ship is not an easy choice, for us it was the only choice. We made the most of the remaining week after we disembarked, finding lodgings and relaxation as a last minute plan. One thing I know for sure, there are no great bargains to be had when you are booking everything last minute, including the airline tickets.

And this brings me to my experience at the airport. We have all heard about these new full body x-ray scanners at the airport, but I was definitely not expecting to finally meet one when I was going through Security. 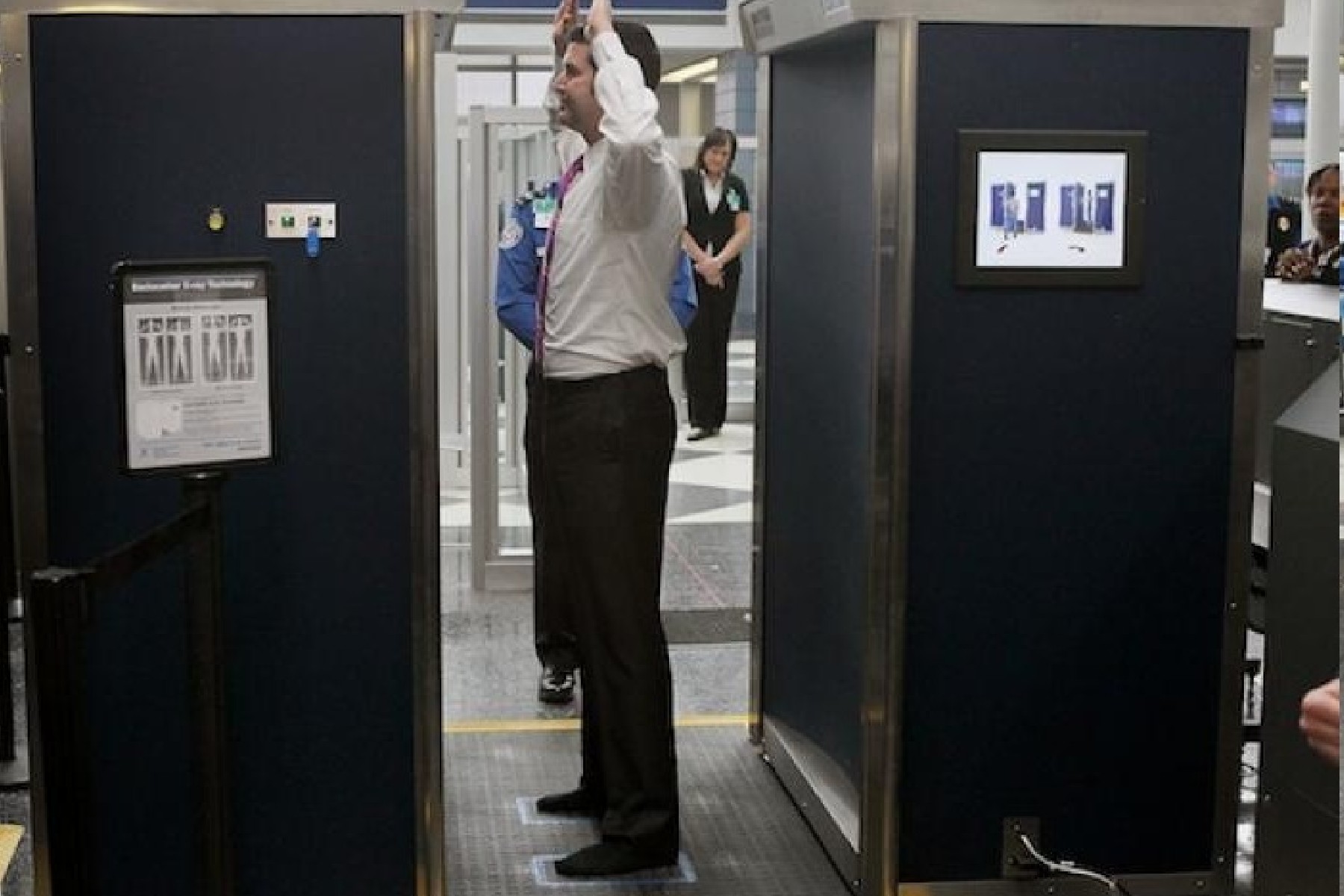 Yes, we are all familiar with the 1-second metal detector walk-through machine. But the new radiation exposing apparatus was absolutely intimidating.

Not knowing what the outcome would be, I asked the security officer if there were another option to THIS radiation exposure. “Yes”, he said. I could be patted down. With no hesitation, I immediately said “Okay”. He tried to talk me out of the pat down and reassured me that the radiation exposure was minimal, but every cell of my being said that what he told me could never be right. He, like the masses that work there, have been indoctrinated to believe that this stuff is actually harmless. Just as harmless as mammograms, radiation therapy and CAT scans that can leave you with many cumulative chronic side effects. I think I’ll pass.

Even though the media has played the pat down as personally intrusive, I figured I’d take my chances. Radiation exposure is not reversible. The pat down was an easy choice.

This is what I found:

This was really eye opening when I looked at everything in perspective. On the surface it really does appear that these scanners are very low radiation. But further exploration revealed some other interesting aspects about these machines.

The experts say that the low level beam delivers a small dose of radiation to the body but because the beam concentrates on the skin - one of the most radiation-sensitive organs of the human body - that dose may be up to 20 times higher than first estimated. Wow!!

In particular, children and passengers with gene mutations -around one in 20 of the general population - are more at risk for skin cancer, as they are less able to repair x-ray damage to their DNA.  Double Wow!

Furthermore, the type of skin cancer usually caused by this type of radiation is basal cell carcinoma and it will probably not even appear until decades later.  And the unfortunate part is that we will still probably blame it on too much sun exposure!

A major concern that I found in all my research is the lack of monitoring of the output of these machines once installed. So if you just happen to be one of the unlucky ones who gets irradiated by a faulty machine, you would never know it, until years later when you had a cancer of some type. And even then, you would never figure that it was caused by the cumulative effect of x-rays.

Since cancers of all types are on the rise, why would anyone willingly submit to this type of exposure? And if you are a frequent flyer, this routine radiation dose, like any radiation dose, will just be adding on itself, cumulatively, creating all kinds of mutagenic activity in your body. Triple Wow!

This is very unlike medical/dental x-ray machines which are calibrated daily and inspected by the city at regular time intervals. And the redeeming quality of medical/dental  x-rays is that at least it is diagnostic and may even help with evaluating you health or saving your life.

There are just so many toxins in our environment- pesticides, preservatives, artificial sweeteners, plastics, heavy metals, drugs, pollution, EMFs, background radiation. The list is literally endless.And the unfortunate part is we don’t even know that we are being exposed to them. They are insidious and hidden.

So why would we knowingly and willingly submit to extra “safe” airport radiation when there is a simple non-toxic choice of a pat down?  Thermograpy or ultrasound may be a better choice for future airport security. But until the system advances, take precaution and protect yourself.

So here are some good ideas to protect you from extraneous radiation, whether diagnostic or otherwise:

1. Sea vegetables, commonly known as sea weeds, such as kelp, purple dulse, wakame, and sea lettuce are high in iodine. Sea spaghetti, nori, and kombu are other sea vegetables to consider. One quarter teaspoon of kelp provides 3 mg of iodine.

Sea vegetables contain sodium alginate, a natural chelator. Chelation is the process of drawing toxins to a certain food and then releasing it from the body through the colon or kidneys. Alginates in sea vegetables not only reduce the amount of strontium-90 absorbed by the bones by over 50%, but they also bind other heavy metals, such as lead, plutonium, and cesium. Green juice powders are particularly an easy way to get your sea vegetables.  See our blog on Green Drinks for insights.

2. Bee pollen and bee propolis are two other super foods to consider for protection against radiation. Bee pollen has a surprising number of positive benefits and applications. It provides a high content of the nucleic acids RNA and DNA. It is also reported that bee propolis is effective in clinical stages of radioepithelitis, the inflammation of epithelial (skin) tissues due to radiation.

3. Citrus fruits and especially grapefruits, are high in a bioflavonoid called naringin. Naringin is a free radical scavenger. Naringin was found to prevent chromosomal damage from radiation in mouse bone marrow. Therefore, it may reduce cellular damage in humans caused by radiation. Citrus fruits are also high in rutin, a flavonoid glycoside which strengthens capillary walls and reduces hemorrhaging after x-ray exposure.

4.  Use homeopathy to offset any radiation exposure.

5.  Add high amounts of anti-oxidants. They are always found in the most colorful fruits and vegetables. Add super foods to your diet or take supplements to enrich this.

6. Do digital x-rays, ultrasound or thermographs whenever possible instead of conventional x-rays.

7. Use EMF protectors on yourself, your cell phone and in your home.

8. Do the pat down at the airport. An easy solution.

Ultimately, you are the only one who will be responsible for your own health. Own it.

Reply Propolis Murah
7:01 AM on March 6, 2012
A very useful Blog..
it was nice that other people also obtain solutions that are effective and safe and free from health problems.
Thank you
Propolis

Reply Dr. Brand
6:56 PM on March 6, 2012
Hi Propolis,
Thanks for your kind words. I like to think that there are easy natural alternatives to the toxic ways that conventional society consider safe. We need to get conscious and ask better questions to get better answers. If something doesn't feel right, trust your intuition and don't do it.